UNC libraries celebrated 2019 GIS Day on Nov. 13, 2019 with the traditional Student Map Competition and Humanitarian Mapathon. Both events were sponsored by the Department of Geography and the University Libraries. The winners of the map competition were decided by popular votes from event participants.The map contest received 31 map submissions. About 40 people participated the map contest event, and 10 people participated the mapathon event. 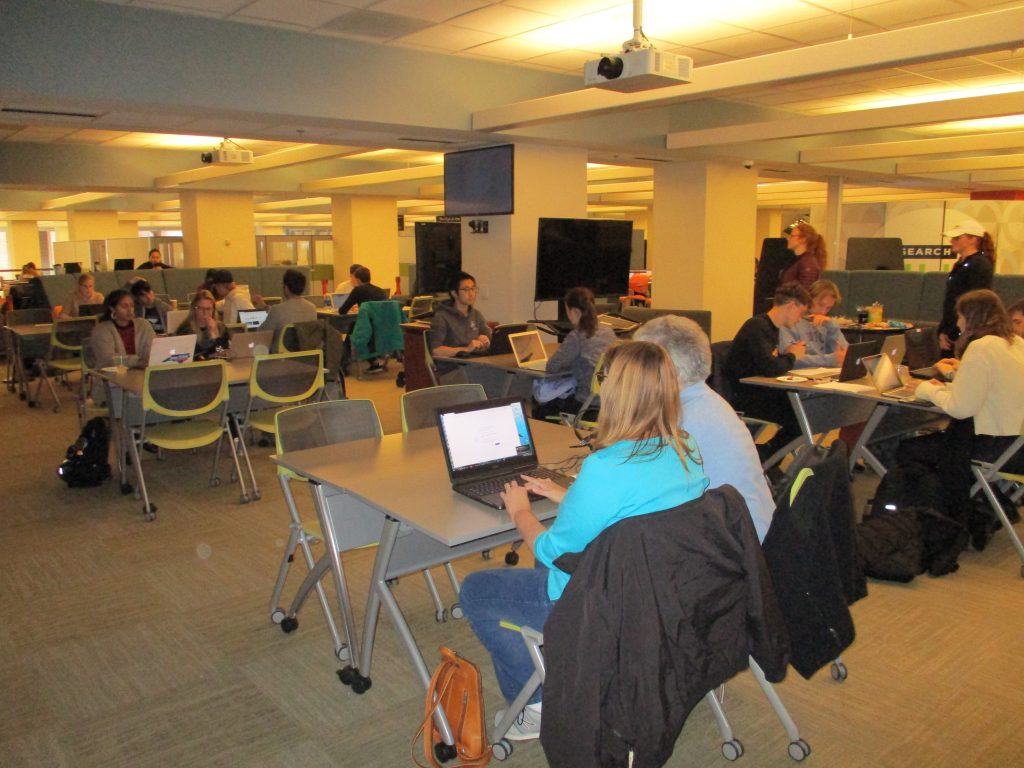 Caleigh  wrote “In Eastern North Carolina, the water quality of streams and rivers is often compromised by the high density of Animal Feeding Operations (AFOs) located in that area. These AFOs have open pit lagoons that hold swine waste and create public health problems if the waste runs off into nearby water. In order to address these concerns, this geographic study investigates where the highest number of animal feeding permits are located within small watershed boundary units. Each boundary is defined by a hydrologic unit code (HUC) with 12 unique digits. Finding the HUC-12s with the highest density of animal feeding operations within a 1000 foot buffer of a river or stream can be a proxy for estimating where the highest levels of fecal matter can be found. The 1000 foot boundary was chosen because of Iowa’s regulations that state an AFO of any size must be more than 1000 feet from a major water source (Iowa DNR, 2005).  Therefore, the permits that fall within a major or minor tributary may pose a health concern for North Carolina’s waters. ”

Second place map was created by a double major student – Grace Thompson. Her majored in both Geography and Urban Planning.

Grace wrote ” As part of a larger project for Geography 591, this map was originally intended to be a population potential map for the various homeless shelters in San Francisco. Once I gathered the data, however, it became apparent that without more precise information on where individuals suffering from homelessness lived, a population potential map would not provide any meaningful analysis. The data was simply too broad. However,  the data still told a compelling story. Although there is one district with many more homeless shelters than any of the others – it still had the most amount of unsheltered individuals suffering from homelessness. This map just describes the surface of an undeniably complex story; however, the information that it presents can be utilized by community advocates, policy makers and urban planners in the shaping of the urban landscape in San Francisco.”

Devon wrote “This series of maps represents the incidence of fatal drug over dose by county in the continental US between 2000 and 2015. The Center for Disease Control (CDC) data here represents annual incidence per 100,000 people with deaths attributable to overdose. Although the CDC does not record the drug which caused the death, this increase between 2000 and 2015 is widely attributed to the increase in prescription and illegal opioid use. The deepening crisis is highly spatially autocorrelated and represents a deepening divide between regions more and less affected by the crisis. The Southwest, Pacific North West, and Appalachia have face particularly stark increases in overdose deaths. These trends are related to issues of race, class, rural-urban divide, and social programs such as access to treatment and the availability of overdose-prevention medication such as Narcan.”