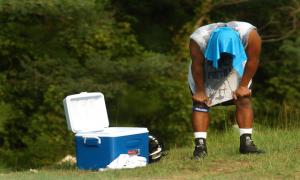 As summer months come and go in North and South Carolina, many people are noticing more days of intense heat or uncomfortable humidity each year. To some, it’s little more than a growing inconvenience—but to others, the increasing heat burden is becoming a matter of life and death. 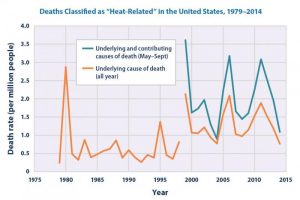 In fact, weather records show that heat waves in the United States are occurring more frequently, becoming more intense, and lasting longer.1 In the United States, more deaths have been attributed to heat than from all other natural disasters combined—an average of more than 650 heat-related deaths occurred each year between the years of 1999 and 2009.2 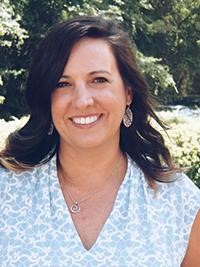 Emergency departments in North Carolina are carefully tracking the number of heat-related visits they see. Ashley Ward, a UNC Geography PhD, Adjunct Professor, and Climate Integration and Outreach Associate with the Carolinas Integrated Sciences and Assessments (CISA) program, attributes the observed increase in heat-related emergency room visits not only to the effect of increased temperatures in the Carolinas, but also to relatively low levels of community preparation for extreme heat events. Ward is working with the National Integrated Heat Health Information System (NIHHIS), a collaboration lead by the National Oceanic and Atmospheric Administration (NOAA) and the Centers for Disease Control and Prevention (CDC), to assess problems and determine solutions to combat extreme heat in North Carolina’s most vulnerable counties.

Although urban areas in the Carolinas can experience increased temperatures due to the urban heat island effect, the proportion of people who experience heat-related illnesses seemed to be higher in rural counties. This sparked an interest in CISA’s research team to investigate the differences.

The Sandhills region is in the southwest corner of North Carolina’s Coastal Plain. Despite being associated with coastal regions, it does not benefit from the cooling of coastal breezes. Counties here are largely agricultural, and outdoor workers are vulnerable to the effects of extreme heat.

In their investigation of North Carolina’s Sandhills region, they learned that many communities lack the resources to combat the effects of heat waves. Cooling centers such as libraries, recreation centers, or other public places with air conditioning are scarce and are generally an impractical option for rural settings. Travel to and from hospitals and treatment centers is difficult due to the long distances. Demographic data show the majority of the population in this rural region is at higher risk for heat illness.

Children, the elderly, outdoor workers, and emergency responders are all vulnerable to heat-related illness. In North Carolina in particular, student athletes have also emerged as an at-risk population. Ward points out that many residents in the rural areas of the Carolinas are farm workers whose salaries are contingent on productivity—an incentive to continue working even when conditions become dangerously hot. 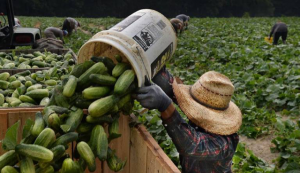 Geographic features of the Sandhills region can make hot days even hotter. For instance, the sandy soil of the region has trouble holding water near the surface, so incoming sunlight energy ends up heating the land rather than evaporating moisture. Additionally, the coastal breeze that cools regions to the east does not quite reach the Sandhills. Ward recalls thinking, “What this region really needs to keep people safe from extreme heat is an early warning system.”

Enter Maggie Sugg, then a graduate student in the Geography Department working with the Southeast Regional Climate Center (SERCC) at UNC Chapel Hill. She used an epidemiological surveillance system called NC DETECT to compile records of every visit to every emergency department in the state. This system provided information such as zip code and payment method for patients, offering Sugg a wealth of socioeconomic insight on top of basic demographic data. Sugg worked with Dr. Chip Konrad, a professor in the Geography Department and Director of the Southeastern Regional Climate Center and CISA Principal Investigator, to develop a pilot instrument that could associate maximum daily temperature with the incidence of heat-related illness. The model considered multiple vulnerabilities and health outcomes from NC DETECT, and integrated climate data provided by SERCC.

The initial findings were surprising. In previous studies, heat illness had been most prevalent in urban locations, but in North Carolina, heat illness was 8–10 times higher in rural areas than in cities. This finding led the team to partner with North Carolina’s existing Building Resilience Against Climate Effects (BRACE) program, which enabled them to begin engaging with communities in the Sandhills region. Previously, decision makers in the state had an inkling of the problem heat-related illnesses posed across the state, but they were not aware of its magnitude. The North Carolina Division of Public Health soon began sharing Sugg and Konrad’s work across the state.

The pilot instrument, dubbed the Heat Health Vulnerability Tool or HHVT, was released In 2015 on the Convergance of Climate-Health Vulnerabilities website. The tool uses National Weather Service heat index forecasts to predict numbers of emergency department visits. Decision makers can use the HHVT prediction to be aware of dangerous conditions. The tool helps them decide when to send heat warnings to vulnerable groups, provide information about cooling centers, or take other steps towards preparedness. 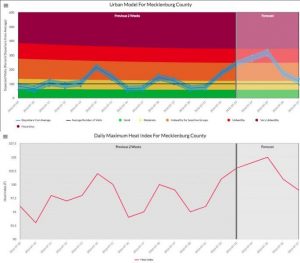 The team worked with others at the Division of Public Health’s Climate Ready North Carolina initiative to gather a group of people who were willing to participate in a forum to give feedback on the tool. The open forum resulted in improvements, including a useful suggestion to have the model’s algorithm rely on the all-inclusive heat index—which considers humidity as well as heat—rather than relying solely on maximum temperature.

The group also had eye-tracking and usability tests performed on the tool through the University of North Carolina and a student-affiliate at North Carolina State University’s Geocognition Lab. These tests use infrared technology to track users’ eye movements on the page and examined users’ abilities to perform basic tasks. The results helped the developers understand how users engage with the tool, ultimately leading to increased accessibility and a user-friendly color coding system.

Perhaps the most important aspect of the evaluation and improvement phase was the collaboration between the NOAA-funded CISA and the CDC-funded BRACE teams.

The CDC representatives organized engagements and meetings in the Sandhills region, and established a listserv of people interested in the topic. They met in different counties—circulating among five “core” counties—and led discussions where residents learned about the issues of heat health and considered and voiced their opinions about various approaches. The CDC’s meeting planning, combined with Ward’s strong background in community-based participatory research, was a recipe for success.

Ward will admit it wasn’t an easy process. One problem the teams faced repeatedly was the limited capacity of low-resource communities. “When you start engaging,” she said, “you see how the limited capacity impacts every aspect of their lives.” This was especially true when the NIHHIS team began planning interactions with the more rural Carolina communities. The availability of meeting space is something many organizers take for granted, but the group found opportunities to get the right kind of meeting space and then getting internet available in that space were very limited. Furthermore, many county representatives, whose opinions are highly valued, could not attend the regional meetings because they simply did not have the funds to travel. To ensure that these representatives’ voices were heard, student interns with Climate Ready NC travelled to other counties to conduct individual interviews.

Going the extra distance is crucial in making this tool effective, according to Ward. “There’s always something that comes up,” she says, “that you would not have considered otherwise.”

In late 2017, the CISA team conducted an impact assessment to determine how users consulted the tool to inform decision making. The results confirmed what the team had hoped, and offered them some goals and action items for the future.

A process evaluation revealed what Ward had anticipated: a community-based participatory research approach empowers stakeholders and gives them ownership over parts of the project. This analysis also uncovered a need for the team to broaden the scope of the engagement group to include those directly impacted, in addition to previously identified stakeholders and decision makers.

An impacts evaluation made it clear that users did use the tool, the website, and the materials for decision support.

By extending their evaluation period and integrating the  multiple modes of evaluation, Ward says that the team was able to “identify areas of action that then create robust, long-term solutions for community needs that are sustainable long after the research project ends,” providing a tool to help protect North Carolina citizens for many years to come.